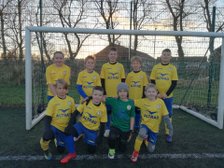 Defeat to end the season for Vedra.

Vedra went into their final league game against Tyne and Wear Bayern knowing that they would face a very tough game against a side that beat them heavily in a 9 a side friendly.
It was to prove to be a very tough day but another game where the Vera players can take a lot of heart from a committed and courageous performance.
Bayern dominated the early exchanges and raced into a 4 - 0 lead in the opening 6 minutes which would have worse but for a great save from Logan in the 2nd minute. Vedra were battling hard though and Ryan, Millie and James H made some good challenges and James N was having a great game up front holding the ball up and passing to Sam, Alfie or Jack when he came on.
Bayern scored 2 more in the half including one that thumped in off the bar from 20 yards! A goal that could've been seen in adult football. Vedra finished the half well though. James N did a great turn and put a shot wide before Alfie had a shot well saved and the follow up just missed Jack and James. 0-6 at half time.
The second half started well for Vedra as Leo set Sam free on the left, Sam then fizzed a cross across the goal which just avoided James N. Bayern though were straight back on the attack and Logan was forced into another save before they did score in the 29th minute to make it 0-7.
The 30th minute showed everything good about Vedra in the game and the season. Despite constant pressure Bayern got a shot away which was well saved by Logan. The ball was bobbling around in the box but James H got there to clear. Just afterwards Bayern made in 0-8 with a ball that bounced through the defence.
Vedra were playing with 8 at this point but were fighting hard in the game. Jack and Alfie were very busy in midfield and the rest of the team were constantly battling and trying to get forward. Vedra forced a couple of corners and half chances before Bayern scored twice more the finish the game as 0-10 winners.
Bayern were a really good side and scored some really good goals but offered praise to the efforts of all the Vedra players for their hard work. They offered the Star player award to Millie but in truth it could have been any one of the squad. All the players have had a great first season. They have a lot to learn still but if they stick together and continue to work hard they will continue to improve.
Share via
FacebookTwitter
https://www.wearunitedfc.co.uk
Recent news